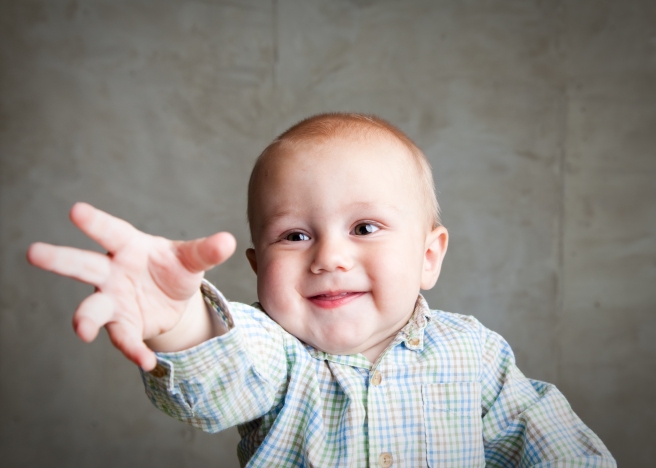 (Reaching for me, or maybe a fruit snack, I can’t remember for sure.)

Baby Boy is a mama’s boy.   If he can see me he rarely wants to be with anyone else.  I’m the one he wants when he gets hurt or is tired.  I’m the one who has to follow him as he climbs the stairs, making sure he doesn’t fall.  I’m the one who spends all day holding him or with him holding on to my leg begging for me to pick him up.

At his recent 1st birthday party, when our home was filled with family who wanted to hold him and play with him, I’m the only one he would be with.  If I wasn’t holding him he was crying.  I had to hold him while we sang Happy Birthday to him.  I had to hold him as the candles were blown out and he curiously poked at his cake.

I was frustrated.  I was hosting dinner and a party for about 20 people.  I wanted both hands to be able to do it.

Then today I left for a while and baby boy was home with just his dad.  They spent the time playing together, just the two of them.  They played with blocks and crawled around the room.  Since I returned Baby Boy seems to have warmed up to Dad a little.  He smiles at him more often and likes him a little bit more.

I’m realizing now what a joy it is to be his favorite, to be the one he wants.  To have this time when he prefers me.  I know it won’t last.  I feel like it has started slipping away already.  He has started to discover Dad.  Now that he is getting old enough to play, Dad is much more fun than Mom.  He rough houses and plays in ways that Mom doesn’t, ways that little boys love.

So now I’m going to relish the times he is in my arms.  The times he wants me and no one else.  I’m going to treat every time like it’s the last time because now I know that it just might be.