Today is my Grandpa’s birthday.  I was lucky enough to be able to live with him for the last year of his life.  We were both going through a tough time.  My Grandma had been gone for a few years, his health was declining and he wasn’t able to do the things that he enjoyed anymore.  He was ready to go.  My husband was in Iraq and I was home with two small kids and was trying to run a household.  We were both happy to have the other one around.

Gramps especially loved having the boys around.  He had a special relationship with Medium boy.  He loved to hold him, play with him, and give him high fives.  He had a special nickname for both of the boys, Tiger and Big Ike.  Medium boy went through a hat phase and every time he saw Gramps BYU hat he had to put it on.  Gramps left the hat on the banister during the winter for easy access to it so pretty much every time we walked down the hall I had to put the hat on Medium Boys head. 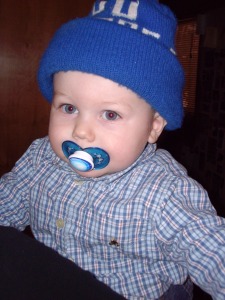 Medium Boy inherited the hat after Gramps died.  I found it in a box of winter clothes last week and it made me smile.  I have a feeling it will be worn to many more BYU football games which I know would make Gramps happy.

There were a few special moments the weekend Gramps died that I will always hold dear.  He had a stroke and didn’t want any medical attention.  He lived for three days after the stroke.  I went in during that time to thank him for letting us be here and to tell him that I love him.  He told me that he loved me too.  It was a mumble as he couldn’t speak but I know that’s what he said.  My sister was in the room and she heard it too.

The next day I was on my way to church with the boys.  I didn’t know if Gramps would still be alive when we got home so I went in to say goodbye again.  I had Medium Boy with me.  Gramps waved to Medium boy with his hand that had been paralyzed by the stroke and Medium Boy waved back.  Medium Boy was almost 15 months old and hadn’t mastered waving yet.  It was a really sweet moment to see them waving to each other, one a child who hadn’t waved much, the other an old man whose hand wasn’t supposed to be waving.

I will always be grateful for the time that I got to spend with my Grandpa.