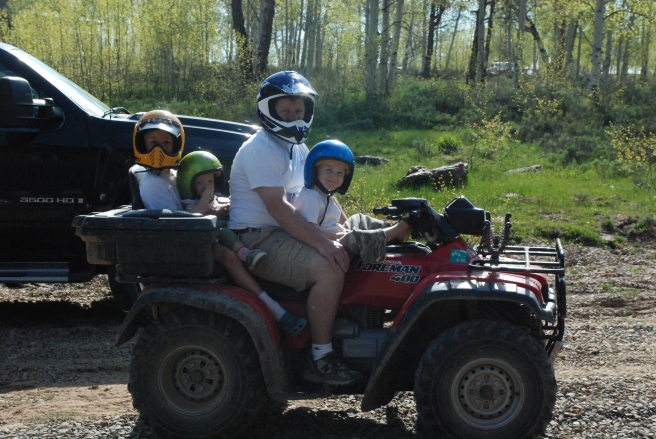 Last weekend the boys and I spent a few days at The Dirt.  The Dirt is my brother-in-laws (BIL) family’s cabin.  It is a beautiful cabin up in the mountains of Utah close to a reservoir.  I’ve heard about The Dirt many times as it is frequented often by my sister and her family.

My BIL and his family built The Dirt.  Everything they could do themselves they have.  They dug the hole for the foundation, hung the drywall, painted, etc.  They’re still working on the finishes.  Every time they’re there they work on it.  It’s close to finished now and very enjoyable in its present state.

The first day we were there I kept thinking how awesome it was that they had The Dirt, to have a mountain getaway whenever you want without any expense except the gas to get there.   How great would it be to have unlimited access to such a beautiful place?  They keep The Dirt fully stocked so you could really jump in the car with practically nothing and stay for a few days without any problem.

I also kept thinking about all of the lessons that we could teach our boys if we did the same thing.  Not only would they learn construction skills but they would also learn about hard work, delayed gratification, patience, team work, balancing work and play, endurance, setting goals and accomplishing them and much more.

Then I started noticing the pictures on the wall of The Dirt of the early days.  When it was simply a foundation and they were all sleeping in tents.  I was talking to my BIL’s mom and she told me about how they had a camp trailer parked on the lot that they cooked in until the kitchen was finished.  I realized that I was seeing The Dirt after 8-10 years of work.  Sure now it is a really nice place to stay but it wasn’t always that way.

And I realized that all of those lessons that my boys would be learning, I would be right there next to them learning them myself.

Suddenly the idea of building a family cabin wasn’t so enticing anymore.